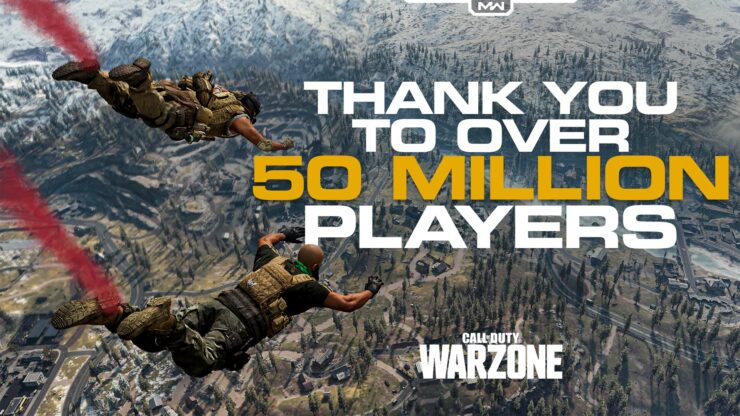 Warzone, the free-to-play Battle Royale inspired Call of Duty game launched by Infinity Ward, is breaking records when it comes to player engangement and player count. In just over a month, Warzone surpassed over 50 million players.

Of course, part of the reason is that it debuted on March 10th, which is pretty much when most of the Western world was just starting to be engulfed by the COVID-19 pandemic. With hundreds of millions of people forced to stay indoors because of the various lockdown measures issued by the governments, the fresh Warzone experience turned out to be even more appealing to gamers who suddenly had a lot of time to spare.

Speaking in a recent interview with GamesBeat, Infinity Ward’s Narrative Director Taylor Kurosaki commented that lots of players are thankful for Warzone given the situation. He also said the server performance so far is basically flawless.

A lot of people out there are pretty thankful that they’ve got Warzone to help keep them company, yeah. Every indication I have, firsthand and from what I’ve heard, is that performance in the game is perfect. It’s flawless. We’re not seeing anything in matches. Everything is all systems go. The main way we’ve been trying to be good citizens in a time where there are demands from lots of different places is just in terms of when updates come out and things like that. But when you’re loaded into a match it’s smooth sailing.

Of course, Kurosaki was the Narrative Director on Call of Duty: Modern Warfare and interestingly, he said fans of both Modern Warfare and Warzone are hungry to get more story, which is why they have added the character Alex back with Season Three. Apparently, there’s room for even more story coming up in future content drops.

What I’ve seen is that our fans are super-hungry for more story. They want to know how Alex got out of the gas lab at the end of the campaign. They want to unlock the mystery.

I would look at it like we’re making an episodic TV series. A lot of the time, when the showrunners of the Sopranos or Lost or something like that are setting out to tell a story, they’re not exactly sure how many seasons the show is going to be on the air. We know where we’re going, and we know where we’re starting from. The question just remains, how long will it take us to get to our conclusion? That’s kind of up to our fans.

Again, based on how it’s been going so far, it seems like people want to play more and more. We couldn’t be happier with the amount of engagement we’ve had so far.

Have you been playing Warzone in the last few weeks and if so, what do you think of it? Tell us in the comments.